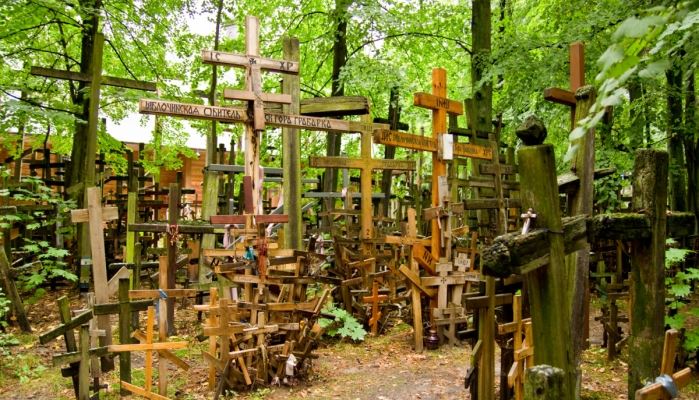 We invite you to travel on the trail of Orthodox churches and blessed places. We will begin with a visit to the sacred Mount Grabarka, where the believers are washing affected places in the miraculous spring and come around the church on their knees.
Book the tour now
Grabarka
Suprasl
Bialystok
Grabarka 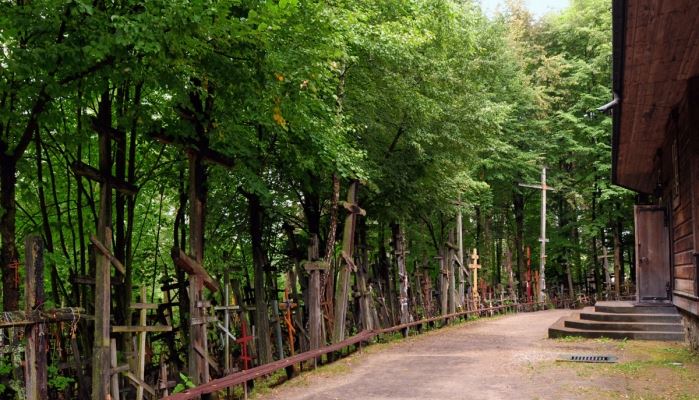 The gate at Auschwitz I camp.

Grabarka. Every year, thousands of pilgrims arrive to Grabarka. Each one of them walk on his knees around the church, some one time, some do few laps. The view is amazing. People on the knees move slowly over the stones and gravel. Injured legs they after wash from blood in miraculous spring.
Others carry thanksgiving and penance crosses on their back. After the evening church service some people stay in the church and prays together with the clergyman. However, most sitting in the open air, among the crosses. From a direct testimony:

“It was hard for us, it was difficult, we wanted sleep, and we went there so lightly dressed, like for parish fair. We sat under the crosses. The whole mountain sang, where everybody sat, a heap of people from every parishes sang. Because of this human singing from their hearts it seemed that you are no longer on the earth, but in the paradise. Somehow we went through the night, and some have already went to the home, and for me there so good, that seems I would never come back to the home.” 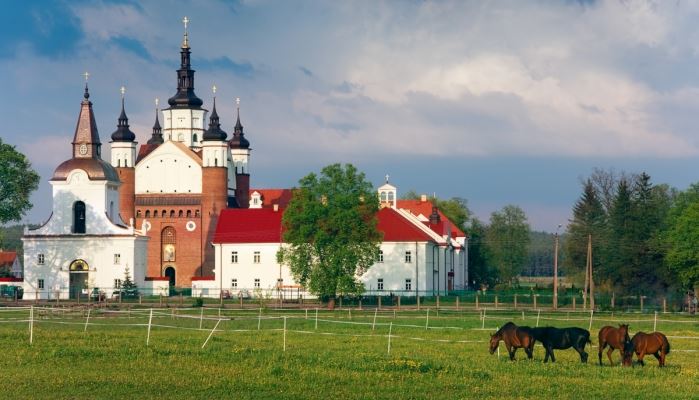 In the fifteenth century the Marshal of that time of the Grand Duchy of Lithuania brought monks to the nearby. But after two years, the monks asked for permission to move to a place more quiet and secluded, so as to be able to quietly pray. The brothers received the allow and after several days of prayers they released on the Supraslanka river a wooden cross. They decided that they will establish a monastery and church in the place where the cross will stop.

And so the Orthodox church was created in this place. 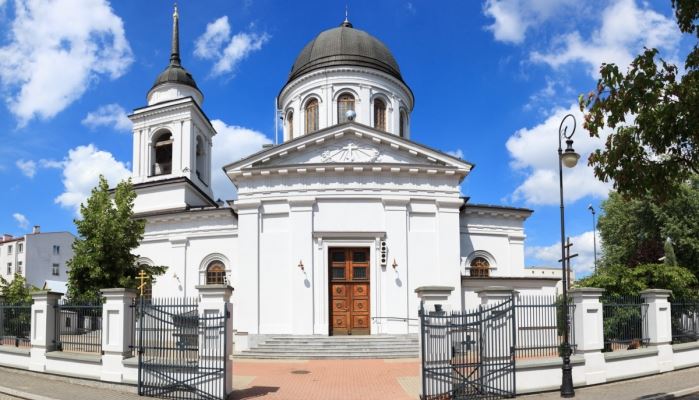 We can find there a revered icons of St. Nicholas, Our Lady of Białystok and the relics of St. Gabriel of Belostok, patron of children and adolescents. Especially interesting is fate of the relics of Gabriel. In the seventeenth century as a six-year-old boy he was murdered. Despite the passage of many years, in his buried body there was no degradation (even after 30 years), and the fire of the church, where the body was made in the eighteenth century, despite the complete destruction of the temple – the body survived. Only partially burnt hand healed itself and re-covered with the skin.

In the times of Communism (1930), the Russians moved the relics to the Museum of Atheism in Minsk, where, after many years, despite hiding in extremely adverse conditions – in 1992, they returned intact to the church in Białystok. At present, the body of St. Gabriel rests in a silver coffin in the south wing of the church.

Highlights of Grabarka and Suprasl and Bialystok Tour from Warsaw.

Can you got to Grabarka from Warsaw ? Can you go Suprasl and Bialystok ?

Grabarka and Suprasl and Bialystok Tour from Warsaw. Trip description.

What's the best way to see Grabarka, Suprasl and Bialystok?

Day trip from Warsaw to Grabarka and Suprasl and Bialystok. Itinerary of the Tour.

4. Suprasl. Church of Transfiguration. Orthodox Church of Annunciation of the Blessed Virgin Mary. Museum of Icons.

Grabarka and Suprasl and Bialystok tour from Warsaw. Practical information.

How much is guided tour of Grabarka and Suprasl and Bialystok?

How long is tour of Grabarka and Surpasl and Bialystok?

How far is Grabarka from Warsaw?

Distance between Suprasl and Białystok is 20 km / 12 miles.

How far is Bialystok from Warsaw?

Distance between Bialystok and Warsaw is 199 km / 123 miles.

How long is the drive from Warsaw to Grabarka?

Time of Grabarka-Suprasl-Bialystok Tour may vary slightly due to the situation on the road or random events which are out of Organizer’s control. 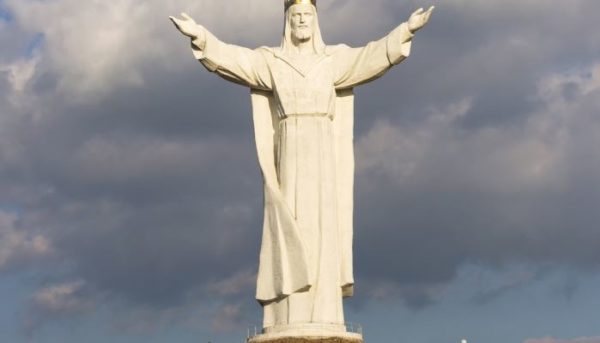 From 390 EUR
We invite you to visit one of the remarkable monument of Catholicism in Poland- the world’s largest statue of Christ the King in Swiebodzin.The figure of Jesus in Rio has a height of 30m (98ft), this in Swiebodzin has 36m (118ft).
Details & Booking